Using existing technology (MRI scan) the folds in a brain’s Cerebral White Matter are first mapped via gyrificaition. The resulting shapes are then analyzed by imaging technology. This technology is comprised of software capable of producing a 3D map of a brain based on scans. Using this 3D mesh map the brain’s neurological health may be evaluated. This may provide the opportunity to aid in the early diagnosis of Autism and potentially other neurological conditions.

The costs and time associated with the diagnosis can be daunting. It is extremely difficult to diagnose a young child, which prevents early interventions.

When developed and cleared through regulatory agencies, this new technology may aid in the diagnosis of a child as young as six months old, which may allow for early interventions and aid in parents’ peace of mind. 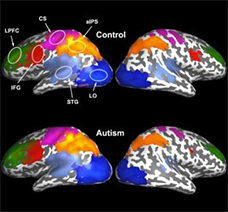 On completion of the listed four steps, the spherical modules are used to classify the brain. This classification is based on the learned shape model developed from a collection of previous data of categorized brain images. The test can be repeated to follow the disease state over time.